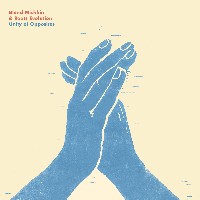 Nailed that dope reggae roots sound and not sure what to do next? Why not combine Jamaican riddims with the traditional sound of the Mediterranaean? That’s pretty much what Blend Mishkin and Roots Evolution have done on their latest LP, Unity Of Opposites which, (as the name implies) is well aware of its disparate influences. But does it work? Well, if the title’s anything to go by, the band are certainly confident it does and if you’ve read the monkey’s post about the album’s gorgeous first single, Egyptian Love, you’ll already know it’s a ‘hell, yes!’ from these parts too.

Only an eight-tracker, Unity Of Opposites neverthless still clocks in at just shy of forty minutes and opens with instrumental, The Way, which eases you into the idea of reggae featuring eastern modal scales. In truth though, the minor key melodies of seventies roots reggae often recall eastern sounds (at least to these ears), so maybe it’s not so much of a leap as it might seem to combine the two musical strands. Up next is another former single, Mad One featuring Dub Pistols’ Barry Ashworth and MC Dank Meme with the former musing about walking a mile in another man’s shoes (he ain’t gonna get them back!) and the latter so bassy he comes on like a didgeridoo. The third track is the aforementioned Egyptian Lover which arguably remains the high point on a quality LP and features a sung vocal by BnC. Singer Kit Kido guests on Sound The Alarm and does a jazzy and highly effective turn on the mic leaving just two remaining vocal cuts. BnC turns up solo again in falsetto mode on the The Reveler and in the company of Natty Campbell on Fire In Di Dance. Nestled between the Kido cut and The Reveler is third former single The Crossing – probably the monkey’s second favourite cut on the album which opens to a very eastern-sounding non-lyric vocal. The LP closes as it begins with an instrumental though Cosmos (a.k.a Egyptian Love Reprise) does start with a spoken word contemplation of the music of the spheres before floating off into a riddim drenched in eastern strings. Opposites? If you like. Unity? Definitely.
(Out now on Rewind Guaranteed / Boom Selectah Records)