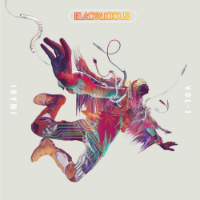 No Blackalicious LPs in ten years and then three come along at once. Well, one anyway, with news of a projected trilogy. Yes, they’re back, the band that first emerged amid the mid-nineties explosion of ‘underground hip-hop’ rubbing shoulders with fellow Solesides/ Quannum Projects homies DJ Shadow and Latyrx and the likes of J5 and Hieroglyphics and went on to release three well-received LPs between the nineties and the early noughties before splitting to do other stuff. Chief Excel’s production was typified by fat beats and a penchant for funk samples while Gift Of Gab was a much-respected emcee whose place in hip-hop history was assured by Alphabet Aerobics on which he rapped about every letter in the alphabet as Excel took the tempo up from 85 to 140 bpm. Still – that was years ago. How do they fare so long after what might be considered after their heyday? Let’s do a ‘Byron’:

1. FAITH feat. AMDE (of THE WATTS PROPHETS)
Short but portentous talkie intro over boom-bap psychedelica – that sort of thing has good form in terms of what usually follows…

2. BLACKA
…like this. Bloody hellfire! That’s what I’m talking about. Boom and indeed bap. Flames. Big black ones. They haven’t sounded this good since the A2G EP.

3. ASHES TO ASHES
Things are on a roll and this bleepy Latyrx-ish groove with disco bassline and heavy break just keeps it right on rolling.

4. ON FIRE TONIGHT feat. MYRON (of MYRON & E)
They’re on fire all right. Myron joins Gab over a super-heavy sampling of Honey & The Bees’ Love Addict.

8. INSPIRED BY feat. BOSCO
Misguided attempt to modern-up the beats. The lyrics are probably good if I could stand to listen…

9. WE DID IT AGAIN feat. DANIELLE FLAX
Yes they did! Good vibes are back as Gab shares his love of mic manipulation, Xcel drops lounge-loops and Flax provides a – well – a lounge hook.

11. TWIST OF TIME
Once Gab was underground, then he got big. But he didn’t sell out. See? You don’t have to let money change you, Sisqo, you bitch.

12. THE BLOW UP
Can I get a witness? Gab on a Gaye-ish beat. The positivity continues. Good times. Comes complete with Love Walrus-style outro.

13. LOVE’S GONNA SAVE THE DAY feat. FANTASTIC NEGRITO
Christ. Horrible love rap. Not that kind of love. Love for the rest of mankind. Pass the bucket…cheers.

COMMENTS: Clearly there’s considerable life in the old dogs yet. Six or so tracks shorter and called Blacka, this would have been a stone classic EP and you know that this is going to end up in precisely that redacted format on a playlist on your phone anyway since it’s so easy to exercise personal quality control on your albums these days. Still nine or ten tracks as solid as the good ones on here is a rarity these days. Discuss.

BEST TRACKS: Blacka, On Fire Tonight, We Did It Again, The Blow Up, Alpha & Omega
(Out now on OGM Recordings)

Posted on 1st October 2015 no comments