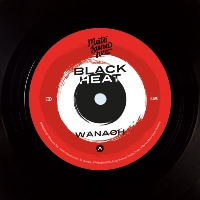 In the second bit of large funk re-issue news today it’s all about the latest double trouble 45 from Matasuna Records who select two cuts from the debut self-titled LP by 70s funk band, Black Heat. On the A-side it looks like a first time on 45 for the flute-laced Wanaoh which will surely have rare groove hounds getting misty-eyed thinking about the early 90s when they used to get all misty-eyed for re-discovered 70s gems like this. On the flip is a second instrumental – this time the chugging funk beast (and far more famous of the two) – Chip’s Funk. Obviously, this is selling out fast and it’s also a vinyl-only affair so forget getting your skates on and head for the jetpack instead.
(Out now on Matasuna Records)