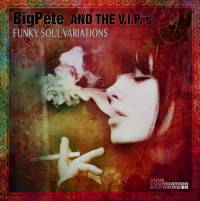 If your world of party break-related music isn’t varied enough at the minute, you might need a big dose of BigPete & The V.I.Ps. New LP Funky Soul Variations leaps from electro swing to squelchy funk to four-to-the-floor beats to moody strings and then electro blues – and that’s in just the first four tracks. In fact the moody strings and electro blues are in the same track – How It Feels To Me. But who is this masked man?

Step forward French Canadian dj/ producer Pierre Borduas whose thirty-odd years of djing have informed this new effort and revealed sufficient talent to catch the keen ears of a man familiar to MB readers – Pulpfusion – who (word to the wise) has been scouting round for suitable artists for his new label Soul Foundation Records. So much did BigPete’s material catch those ears in fact that this is the fledgling label’s debut release.

And you can see why with virtually every cut aimed at getting bodies moving. In this Pete is aided and abetted by the V.I.P’s – or as he clarifies ‘the Virtual Interactive Players’ – a.k.a. vocalists from all over the world with whom he has hooked up via the magic of interwebular technoolgy. For the best cuts – head to the uptempo electro swing of appropriately-named opener Make Me Dance, the pulsing, hypnotic disco of Discosonic Jumble, the pounding eighties funk of Funk The New Year.
(Out now on Soul Foundation Records)

Posted on 2nd November 2015 no comments