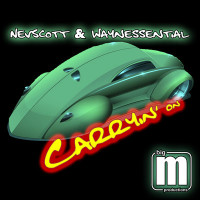 Never ones to fire out a single release if they’ve got two in the chamber, Big M’s second drop this month finds Nev Scott & Wayenessential on a mash-up tip. First into the blender is Ike and Tina’s funk-soul cut Cussin’, Cryin And Carryin On. On the original, Tina belted out the words, “My daddy told me a long long time ago/ Never take candy from a stranger/ I should have thought about that when I met you/ I should have run away from the danger,” – autobiographically as it turned out. She continues to do so on Carryin On, though ironically it’s Ike (or at least his instrumentation) who takes a beating now via a very large ghetto funk stick. Sweet F.U.N.K. on the other hand finds Indeep riding a ghetto funk train en route to Alabama. Have a listen – you’ll see what I mean.
(Out now on Big M Productions)