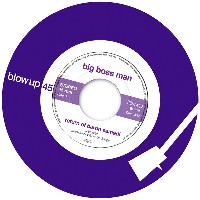 How’s this for a triple return? Big Boss Man are back, with a heavy bongo n organ-laced track called Return Of Baron Samedi marking a return to things funky after a couple of LPs which have been pretty much exclusively sixties guitar fuzz and R&B-focussed. And that’s only the beginning of the good news for Return Of Baron Samedi is but the B-side to Juju Funk which the monkey has been given to understand will be teased in a couple of weeks. So will that be a vinyl 7″ then? Certainly will! Obviously if you’re going to return in style, you might want to drop two vinyl 45s and it seems this is the plan for a second vinyl 7″, Double Groovy b/w Trans-Pacific Express has also been announced with both 45s available to pre-order now (though the only audio you can check is Return Of Baron Samedi) and due to drop towards the end of September. Keep checking in with the monkey because as soon as there’s any more news – it’ll be up on here.
(Pre-order now/ Out 23 September on Blow Up Records)