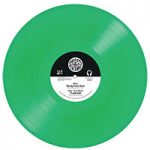 After more than a half year of silence, the Beats & Culture Youtube camp hook-up with Melting Records for a third release blending hip-hop and dub with exotic sounds – this time featuring The Spy From Cairo, Thunderball, Invisible Sounds and SomehowArt. That’s right, four tracks, which means that, rather than the seven inches of the first two releases, they’ve had to resort to the vinyl format of champions – the twelve inch – and in ‘herbal’ green vinyl, no less. Up first is The Spy From Cairo who laces the dub of his Nafas with the sounds of the Middle East while Invisible Sounds makes his label debut with the blissed-out trip-hop of Common Path – remixed in a dub stylee by SomehowArt. It’s all about the Thunderball track for the monkey though as the DC outfit drop sinous, sitar-drenched science on Enter The Brahmin.
(Out 30 July on Beats & Culture)