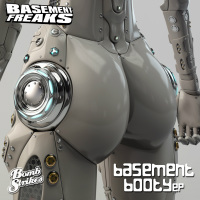 Undeterred by a little thing like the close of his record label Bombastic Jam, Basement Freaks is all poised to drop seismic breaks on the BombStrikes label with the Basement Booty EP, the cover of which depicts a (female) robot’s arse. We’ve all been there. Mind you, can a robot really have a gender? Let’s sidestep that thorny metaphysical minefield though and consider that this contains four military-grade breaks weapons of the kind for which the Bombstrikes label is noted. Middle tracks Funkin It Up and Make It Clap reference the funk and the release is topped n tailed with Jamrock Bass and Ladies Look Pretty – the latter of which pretty much amounts to a tactical electro-breaks assault weapon.
(Out 4 September on Bombstrikes)