THE BAMBOOS: Lit Up + Video 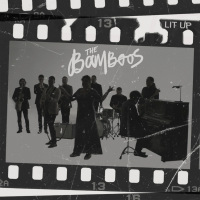 Oh hello – Oz funk commandos The Bamboos are finally back with new single Lit Up off forthcoming album Night Time People – their eighth – due for a June release. If you’ve been paying attention (and you’d have to have been in the northern hemisphere because last album (2013’s Fever In The Road) slipped by with no discernible promo whatsoever), you’ll have noticed that the last two LPs have been something of a departure from earlier efforts. Where once production and songwriting fairly faithfully recreated the sounds of the late sixties/ early seventies, latterly the Bamboos have propelled themselves into the spotlight with more polished production and a recognition that there might have been a few decades of music after 1973. This continues on Lit Up, a mid-tempo Kylie Auldist-fronted, piano-n-horns-led, post-break-up number with percussive nods to the Rolling Stones’ cowbell on Brown Sugar. What’s that Kylie? “I must confess you’ve made me a mess…keep getting up lit up all night”? Um – I’m not sure alcohol’s the answer there, Kylie. I think…sorry…”Loaded again but I can’t phone a friend”? Yeah – well, I hate to say I told you so. How about a nice video for Lit-up shot in tasteful chiaroscuro? That’ll see you right.

Posted on 23rd February 2018 no comments