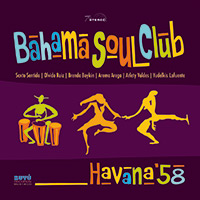 No prizes for guessing the vibe on Bahama Soul Club‘s new album Havana ’58. That’s right, they’re channelling the spirit of pre-Castro times when corruption was rife and Cuba was a Caribbean playboys’ playground. Of course, this was also a golden era for music in the ‘Pearl of the Antilles’ – the irony being that casting out the capitalist pigs meant losing the grooves too. One consequence of this was that such former legends as Ibrahim Ferrer could in latter years be found reduced to shining shoes on the streets before a glorious twilight career resurrection documented on Buena Vista Social Club.

Back in the day though, when it was all snouts in the trough and Stateside mafia mingled with corporate cronies, sleazy senators and the likes of Brando and Sinatra, shit was wild and Cuba was a musical melting pot – as indeed it still is. As indeed is Havana ’58 too, which mixes latin jazz with rumba, soul, bossa, boogaloo and a number of influences (funky breakbeats for one and ‘cinematic’ soundscapes for another) that – er – might not actually have been around in ’58. But we won’t hold them to account for that. Just as well really as the Sexto Sentido-featuring Eleggua and Tropicana are driven by decidedly drum n bass-ish organic percussion, and nu-funky – even disco-ish rhythms respectively. Other highlights include David Holmes-ish organ-driven cocktail soul jazz opener Something Unique, a suitably sinister breaks-fuelled, latin-jazz epic named for the ‘mob’s accountant’ Meyer Lansky and the funky bounce of – er – Dizzy’s Bounce. All this talk about music has given me a righteous thirst though. Could you be a love and pass the rum – and can I cash in these tokens please – I must have acquired nearly the GDP of a medium-sized banana republic while we’ve been chatting.
(Out now on Buyu Germany)

Posted on 15th November 2016 no comments