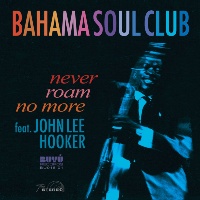 John Lee Hooker? Oh what as in “My first wife left me! Da-dada, da-da!” Well, that John Lee Hooker certainly and, equally certainly, vocals lifted from his 1946 Delta blues cut My First Wife Left Me but no, not very much ‘Da-dada, da-da.” That wouldn’t be very Bahama Soul Club now would it? Turns out this track is their response to Ike Turner once having a grumble that with blues “all you think about is someone crying that their woman’s gone and how bad life is…Why can’t it be something happier? Why can’t it have a beat to which you can do the dances of today?” Enter the German outfit to knock-up a new Latin-soul-jazzy groove over which they’ve laid excerpts of JLH and allow hip cats to shimmy around doing the moves of today – well – of the mid-sixties anyway. The track is the first single off BSC’s forthcoming LP though some folks might be confused having caught a sneaky peak of it a few years ago when it dropped with little fanfare – partly because no LP was planned at the time.
(Out now on Buyú Records)