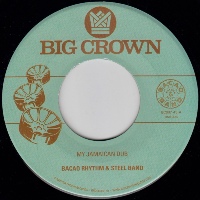 Now here’s a band who always know what time it is when it comes to covers. Yep – you better believe I’m talking ’bout Bacao Rhythm & Steel Band who are about to drop 55 gallon steel drum covers of both Grace Jones and Erykah Badu numbers by way of a new 45 single. On one side, Jones’ farty-bassed, 1983, electro-dub cut My Jamaican Guy gets re-envisaged as a minimal slice of hypnotic funk with steel pan melodies replacing the original’s vocals. On the flip meanwhile, it’s the turn of Badu’s minimal 2007 ode to hip-hop, The Healer, to get re-imagined – this time as a languid, dreamy groove with a throbbing tremolo bass substituted for the subby pulses of the original. I don’t know about you but I’d say the Bacao crew have already started work on a new album.
(Pre-order now; out 20 July on Big Crown Records)