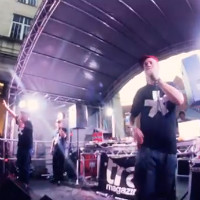 Well, I don’t think this has been getting enough love. Bristol’s finest hip-hop export Aspects make a triumphant rise from the ashes of – well – Aspects. This video shot against the backdrop of Bristol’s mighty “See No Evil” block party back in August sees the band in what is tantamount to a Foreign Beggars-like re-invention of themselves. Except that Foreign Beggars didn’t disband and disappear for a number of years and – er – I don’t really like much of their new shit. Expect rousing antics and (from what the video suggests) the odd-dubstep-styling to Aspects’ former boom-bap sound making it an even bigger party-ass affair. The footage almost makes me wish I’d forgone a fortnight of glorious weather and a couple of good surfs on the Atlantic coast of France in August just to have been at the event. Bodes well for the forthcoming album which features production from Deed, Akira Kiteshi and DJ Format – see Beattape below video. More details when MB’s intelligence-gathering droids return.

Posted on 9th October 2012 no comments