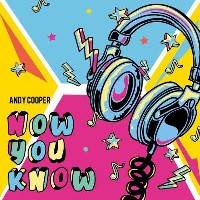 Having diversified into the ‘old school hip-hop-for-kids’ arena this year, Andy Cooper proceeds with new single Now You Know just in time for the start of the new term. Boooo! The new term that is; not AC, of course. Less boisterous than debut kids cut, P.A.R.T.Y., Now You Know finds our man laying down random facts over a beat that might have come off any Ugly Duckling LP back in the day. Yayyy! Clearly angling for a spot on Sesame Street, it’s surely only a matter of time before Andy gets his very own felt suit and this one has probably already ensured that he gets endlessly sampled to boot. And of course he doesn’t forget to school the kids in their hip-hop history, for slotted in amongst the, ‘Sharks are the only fish that can blink’ and ‘mama hippopotamuses’ milk is pink’ is the news that, ‘Grand Wizzard Theodore was the world’s first scratch DJ.’ Crucial knowledge, I think you’ll agree.