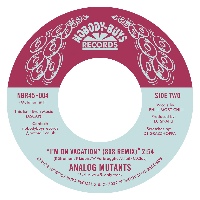 The pre-orders for the Analog Mutants 7″ single, Speak Easy b/w I’m On Vacation (the first to be lifted off the forthcoming Analog Mutants LP) have been flying out, since word of such a drop definitely does not fall on stony ground. Analog Mutants are, of course, producer DJ Snafu of Bankrupt Europeans, Philly mic legend Phill Most Chill and cut-master DJ Grazzhoppa and this is the first release since word of the AM project first emerged in – oohh – 2016, or something. Still, what better way to celebrate Nobody Buys Records’ tenth anniversary? Up first on Side One is Speak Easy, a party-starting but unconventionally swing-based nugget on which PMC schools other MCs on how to rock a mic. Side Two meanwhile features the 808 Remix of I’m On Vacation immediately given away by the throbbing stabs of 808 with which it opens. Here, over an uptempo slice of boom-bap, Phill gives another object lesson, this time in how to tell a story that mostly seems to involve porn stars and drinking gin. We’ve all been there. This second cut will not be appearing on the album, so don’t hang around.
(Pre-order now HERE)