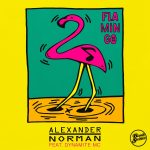 Decked out in shocking pink and spending the entire time cooling off in water and eating, no bird says summer quite like a flamingo.  Which is probably why Alexander Norman named his new anthem for crazy nights and lazy days after it.  Featuring UK mic veteran Dynamite MC (doing a more breezy turn than usual on the mic – perhaps because he’s donned his Adidas shelltoes and is on his summer ‘bounce’) it’s an affair relaxed enough to tap your foot to on a floating sun lounger but with enough of a groove to get your flip-flops shifting on that sticky barroom floor.  If that’s not sweaty enough for you, Beatvandals push the tempo for nu-disco vibes while Kenny Beeper channels Miami bass through a glitch prism – if you fancy annoying the neighbours more than your barbecue and partying into the late hours already has. Oh yes – and there’s the instro too. What else do you need? That’s right more ice!
(Out now on Bombstrikes)