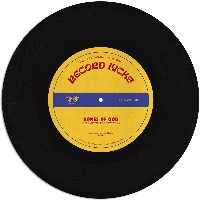 Alexander Korostinsky’s Bones Of God has been burning a hole in the monkey’s inbox for a week now (the trouble was finding something to embed but that’s all sorted now) and you’ll see why when you hear it, for this Turkish-funk-influenced cut is an absolute beast! Must be the season for eastern-themed psych-funk since this comes hot on the tail of the latest El Michels Affair single Kahbi. But then, Whatitdo Archive‘s Korostinsky knows a thing or two about the more eclectic regions of the funk and soul universe. On the flip, you’ll find the slower but more intense Altin Maske for further psych thrills. Is this one on 45? Damn straight! But strictly limited to 300 copies worldwide. A tardy purchase is not advised.
(Pre-order now/ Out 17 June on Record Kicks)