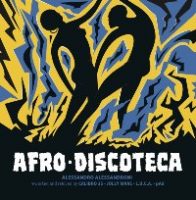 Like afro-beat, cosmic disco and cinematic soundtrack vibes? Have Four Flies Records got a treat in store for you! The Afro Discoteca Reworked and Reloved 12″ has got all three in spades whilst simultaneously providing the sequel to one of those uplifting tales of musical discovery too. Back in 2017, a dusty old tape was found in the vaults of the soundtrack legend Alessandro Alessandroni (who, among other things was Ennio Morricone’s go-to whistler for spaghetti western themes) containing four never-before-heard cosmic-disco cuts which were swiftly released to underground acclaim. Fast forward a couple of years and Four Flies Records wondered what might happen if they let the likes of cinematic funk band Calibro 35 and a collection of like-minded DJs and producers (Jolly Mare, L.U.C.A and aPd) have a crack at some remixes. Suffice it to say, the results are spacier and more cosmic than ever.  Calibro 35 layer on extra percussion and FX and extend Afro Voodoo for example while Jolly Mare tweaks the mix levels on Afro Discoteca for modern ears, re-arranging and extending sections as he goes.  While Afro Sentiment off the original release doesn’t get a remix at all, Afro Darkness gets two which head off in completely different directions – the earthy extended take rife with animal sounds from L.U.C.A. that nearly doubles the original’s length and the monkey’s favourite by pAd which more than doubles the original’s length and sounds like a veritable journey into the heart of darkness.
(Out now on Four Flies Records)