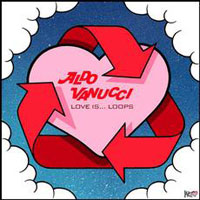 The title of the forthcoming EP from Plymouth’s 14th best dj, Aldo Vanucci, would suggest that he loves loops. Now I’ve heard it, I love Aldo. In fact I think I might even want to bum him a bit for first track You’re All Show which enlists Oz soul sister Kylie Auldist. Actually, I might want to bum her too. Ostensibly the lyrics tear a new one for some preening tosser but in actuality it’s a twenty-first century big-band-funk-soul steamroller that tears a new one for any competition. Also turning up for the party are rap crew A.S.M. who see off groupie hassle on Take Me To A Party on a jazz-funky slice of hip-hop and there’s some huge downtempo Vanucci-lovin’ going on with a Mavis Staples rerub and an inspired appropriation of what sounds very much like the Peter Cetera (of Chicago fame) penned Glory Of Love. It’s not his version though, nor any of the others I found on Youtube – for which – trust me – we are all to be hugely thankful.
(Out soon (inc. wax!) on Jalapeno