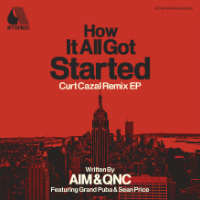 Aim & QnC LP The Habit Of A Lifetime (And How To Kick It) finally made good on a promise to unite occasional collaborators UK producer Aim and veteran NYC emcee duo Q-Ball & Curt Cazal for the course of a full album. And the results were everything you could have hoped for – to the extent that it was MB’s 2015 album of the year. Two years on and you might well be jonesing for more. Say hello then to Aim & QnC’s How It All Got Started – Curt Cazal Remix EP. No prizes for guessing that Curt Cazal might be involved in remixing at least one of the LP cuts then – though he actually manages two – a Skull Snaps’ New Day drums-driven take on the title cut and a skeletal take on the brooding menace of LP opener We Don’t Play. But what’s this – a completely new Aim-produced track as well? That’ll be Lyrical Experts then – yet another synth-driven boom-bap monster every bit as good as the stuff on the album with QnC effortlessly dismissing all mic pretenders: “Don’t confuse us with those dudes you know/ Q’s the one with the lyrics/ I’m the one with the flow/ And when behind the MPC son, I’m a beast/ I sip Southern Comfort but I hail from the east.” All that and the instros too? Boom! Will be available (correctly) on 12″ cream-coloured vinyl for the heads, digital for the kids and cassette for hipsters.
(Out 24 Feb. on Atic Records)