3 KNIGHTS: Burial Proceedings In The Course Of The Three Knights (2013) Kickstarter campaign 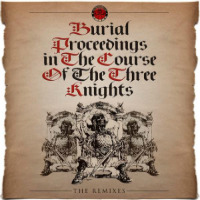 Here’s a big second strike from the Stay On Target crew as they continue their crusade to resurrect the time-buried back catalogue of the UK’s seminal late eighties/ early nineties ragga hip-hop label Music Of Life. This time it’s the pithily-titled classic 3 Knights cut Burial Proceedings In The Course Of The Three Knights. And it’s a beast. No fewer than nine producers enter the lists to take up the remix challenge – Krash Slaughta, Tones, Spatts, Deftex’s Chrome, DJ Mada, Alan Johnson, Mr Bohze and Sure Shot – not to mention original producer Hijack a.k.a DJ Supreme. Lots of dope but hard to choose a champion from between Krash Slaughta’s funky latin b-boy crowd-pleaser and Tones’ bass-driven black knight as the monkey’s favourite. But here’s the rub: it won’t be available until January after a (hopefully) successful Kickstarter campaign to transfer the entire Music Of Life tape archive to digital for re-issue. Kickstarter donaters will be showered with largesse in the form of “limited edition double Vinyl plus digital files of the release including instrumentals ahead of the the world and the chance to get on…[the label’s]…VIP promo list for life”. The funding campaign began yesterday and runs for 30 days. Get on it if you want to see those knights re-horsed!

Posted on 5th September 2013 no comments