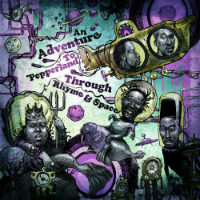 Some will be aware that today is the fifty-first anniversary of a musical singularity, for it was February 7, 1964 when The Beatles once boarded Pan Am Flight 101 to New York. However, as you’re about to find out, today itself is also a musical singularity. Why? Let’s just say it had to do with a certain J. Lennon Esq.’s insistence that the band’s Boeing 707 fly over the Bermuda Triangle. Which means you’re about to get your hands on An Adventure To Pepperland Through Rhyme & Space – the epic 48-track double LP download documenting the consequences of an unscheduled detour through a rift in the space-time continuum by the Fab Four…to 1990s Brooklyn.

Having landed in hip-hop’s golden era, it seems the band set up and jammed in a makeshift studio with assorted rap legends. Which is when things got really trippy. And ill. In fact ill-trippy. Although, clearly, the Fab Four eventually got a ticket to ride back to ’64, the music forged in that time-out-of-time was thought to have been lost. Until now. This album reveals the band journeyed through the doors of perception much earlier than previously thought and worked with everyone from P.E. to Spoonie Gee, Tha Liks to Hieroglyphics and Large Professor to Salt n Pepa. Among others. Frankly, it’s a helter skelter ride from ‘mop-top hip-hop’ to ‘let it beats’ – or perhaps we should think of it as ‘blunted rappers mashed with drug-fried band’ which – after all – sounds much like an album title itself. There cannot be a single earthly reason for you not to turn on, tune in and download the music, the images, the ‘liner notes’ and the instrumentals below in assorted formats. Get on it!

Original download disabled in December 2015 at request of producer in order to stimulate sales of the vinyl version.

As of May 2017 – the album is once again available for download via bandcamp on a ‘name your price’ (no minimum) deal HERE.

29 Responses to THE BEATLES VS. HIP-HOP LEGENDS: ‘An Adventure To Pepperland Through Rhyme & Space’ (2015) Free download double album exclusive!