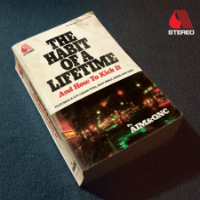 Well, I never – Aim is back and in the company of longtime microphone cohorts Q-Ball and Curt Cazal, not just on a couple of tracks but on every track of the new LP The Habit Of A Lifetime (And How To Kick It). You remember Aim – a.k.a. Andy Turner. His influential ’99 LP debut Cold Water Music featured the world’s most chilling instro hip-hop track ever and hook-ups with stateside rappers QnC, YZ and AG – with this latter on a track that made it onto the original Tony Hawk’s Pro Skater soundtrack. Then there was sequel Hinterland with a big Diamond D featuring single, followed by downtempo instrumental LP Flight 602 and the Birchwood EP in 2007 featuring another track with QnC. And while the latter have been bubbling away dropping quality on the underground circuit since then, there’s been nothing new from Aim under his own name in eight years. Eight years! That’s practically a lifetime ago! Can he still kick it?

Yes he can – and any fog of doubt is instantly dispelled by the sinister bassline of We Don’t Play (featuring Grand Puba and Sean Price) as Turner indulges his fetish for 80s horror flicks with a John Carpenter-ish b-line. A few moments later and QnC are savaging the mic. But then, as they put it, they don’t play when it’s time to slay. Lest you mistake this for an LP of doom-laden beats, the gloom is lightened with the clattery beat of The More I Get, Nike’s uplifting hook, QnC tossing out effortless bars and the sense of a track with mainstream-chart bothering capabilities that doesn’t sacrifice an iota of musical integrity. But despite Cazal’s reference to being recognised by “shit that go boom, boom-bap”, it’s not until third cut The Reunion that we get a traditonal boom-bap beat – though from this point forward such is mainly the order of the day. By the time of the summery richness of fourth track 1000 Reasons (a comic diss of a nuisance wannabe girlfriend – “We had one good night, we should leave it alone/ Thirty texts in a hour, you were killing my phone”), you might well be in love with this LP and you’ve still got seven tracks to go including Gangstarr (The Tribute)‘s – er- tribute to Gangstarr and the electro-influenced It Ain’t Nuthin.

This, my friends is the sound of the true school in 2015. A clear line of ancestry back to the late 90s but utterly fresh beats and QnC’s timeless verbals which together render this one of the finest LPs of the year and the equal of the previous career high points of the parties involved. Videos for the first two singles below; audio snippets HERE.
(Out 9 October on Atic Records)

Posted on 27th September 2015 no comments