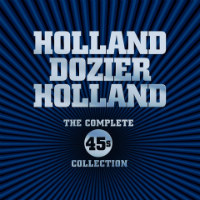 Just imagine how much of a boner the entire northern soul scene would have if, prompted by the release of the Motown 7s Box – Rare & Unreleased Vinyl back in November, someone had the idea to release the entire singles collection from the three labels (Invictus, Hot Wax and Music Merchant) set up by legendary Motown songwriting and production trio Holland Dozier Holland after they parted company with Berry Gordy’s gang. Well someone has had precisely that idea. Harmless Records’ Holland Dozier Holland Complete 45s Collection will consist (slightly ironically) of a 14 CD compendium containing 269 original recordings, including all 157 singles with the remainder made up, if I’ve read the promo correctly, of unreleased singles and rare acetates. Tons of tracks then from the likes of Freda Payne, Laura Lee, Parliament, Honey Cone, Chairmen Of The Board and numerous other soul luminaries and a 60-page booklet penned by legendary rare groove compiler, Dean Rudland. Why – it’s soul time! As Shirley Ellis once sang. Audio soon come – in the meantime check out below filthy guitar-led funk nugget Breakdown – a very early Parliament track that will feature on the comp.
(Out 26 May on Harmless Records)