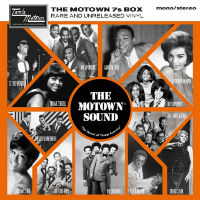 One rare or unreleased Motown track is enough to give most northern soul junkies a bit of a twitch in the loins – so one can only speculate at the consequences of Universal’s decision to put out a vinyl re-issue of fourteen rare or previously-unreleased-on-vinyl Motown cuts. We’re not talking little known artists here either: Marvin Gaye, Tammi Tyrrell, Stevie Wonder, The Temptations, The Isley Brothers, The Supremes – I could go on but the full tracklist can be found below. Compiled by northern soul DJ Richard Searling (whose career included a lengthy stint at the Wigan Casino in the 70s), the PR describes this as a ‘strictly limited release’ though if 2,200 copies (when even a 500 run pressing of your typical vinyl release these days is rare) is ‘strictly limited’ the mind boggles at what the label’s concept of merely ‘limited’ might entail. Expect to hear soaring strings, banging piano chords and massive soul harmonies. My favourite is Chris Clark’s dancefloor stomper Something’s Wrong with which nothing is wrong at all of course. The northern soul forums are already frothing about this and it looks like more than a few people will be packing some tissue in their little leather bowling bag along with their bowling shoes and their talc. About 2,200 of them probably. Full preview audio snippets HERE and some random Youtube dude’s upload of the Chris Clark track below tracklist.
(Out 25 November on Universal)

MOTOWN 7s BOX Rare & Unreleased Vinyl – TRACKLIST:
SINGLE 1
Marvin Gaye – This Love Starved Heart (It’s Killing Me)
The Spinners – What More Could A Boy Ask For
SINGLE 2
Frank Wilson – Do I Love You (Indeed I Do)
The Originals – Suspicion
SINGLE 3
The Supremes – Stormy
Stevie Wonder – Just Enough To Ease The Pain
SINGLE 4
The Four Tops – Clip My Wings
Tammi Terrell – All I Do (Is Think About You)
SINGLE 5
Barbara McNair – It Happens Everytime
David Ruffin – I Can’t Be Hurt Anymore
SINGLE 6
The Temptations – Forever In My Heart
Kim Weston – You Hit Me Where It Hurt Me
SINGLE 7
Chris Clark – Something’s Wrong
The Isley Brothers – My Love Is Your Love (Forever)

Posted on 2nd November 2013 no comments