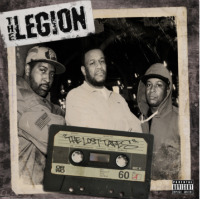 The Legion’s in the area and I don’t mean Royal British- or French Foreign- either. Nope, it’s vintage hip-hop o’clock as Chucky Smash, Molecules and Cee Low bring you no fewer than twenty unreleased nuggets of that grimy Bronx sound on The Lost Tapes.

Back in the day these D.I.T.C. affiliates were signed to Black Sheep’s One Love label and moved the crowd with bangers like Jingle Jangle and Legion Groove but after a couple more hits disappeared into the NYC underground like some sort of hip-hop A-Team. If you could find them though and no-one else could help, they might have sorted you out – like Mos Def for example who had Molecules do a little production work for him. Skip to 2012 and the trio released banger Straight Flow with more tracks in the form of an EP called – er – The Lost Tapes. Naturally, this being hip-hop, there was a massive delay for two years (one imagines The Lost Tapes got lost or something) but finally it’s here. Scratchy old funk and jazz-sampling loops? Neck snapping drums? Lyrical devastation? Check. It’s what they call that grimy Bronx sound. Brand new video to For You below the Confidence remix of Stereo and below that the monster that is Freestyle Demolition feat. Droopy Dog.
(Out now on Ill Adrenaline)