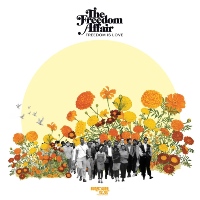 If you missed the autumn release of Freedom Is Love, the debut LP by Kansas City soul outfit The Freedom Affair, maybe now’s a good time to check-in, given its imminent release on vinyl. And while that’s an excellent reason for showing some interest, the main one is actually the rich soul power of this nine-piece outfit (a six-piece bandand three soul sister vocalists) which rivals that of soul’s sixties and seventies golden era.

Dropping on randomly-coloured vinyl, the album’s ten tracks also take in a whole spectrum of soul styles as the first three cuts illustrate. Opener, Heartaches Don’t Come Easy, is a northern soul-style heater, Make Me Surrender is a slower, heavier blues-tinged experience and third track Outta My Mind employs strings alongside funky breaks for a more Philly soul sound. Elsewhere, Move On provides uptempo retro RnB thrills and Rise Up delivers the rawest sister funk of the album. In the final quarter of the LP, the band channel two different Motown giants – the Jackson 5 on the breezy Give A Little Love and Stevie Wonder on closing six minute-plus epic Love Liberates. So far, so retro – at least musically – but the loop between soul’s golden era and the present day is closed lyrically and nowhere does this strike home more effectively than the refrain on One Nation reminding us of the fact that now, as then, racial equality still needs fighting for. Characteristically, the only weapon the band use is a simple statement neatly skewering the inconsistency in America’s primary national myth – “We’ll never be one nation if we can’t have a conversation/ We can’t be the land of the free if you won’t hear me.”
(Out now (digital)/ Out 12.3.21 (vinyl) on Colemine Records)

Posted on 17th February 2021 no comments