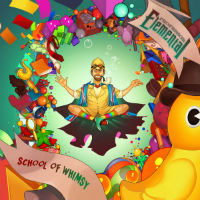 Last time the monkey hopped onto the Professor Elemental omnibus it was for his excellent Apequest album – a glorious steampunk-chap-hop-time-travel-concept adventure as the Prof. desperately tried to find beloved simian butler Geoffrey whilst battling his great-great-great-great-great-great grandson, Gideon. But how do you follow that? One can only imagine Elemental digging through a gigantic but musty trunk, exasperatedly tossing idea after idea over either shoulder until suddenly, covered in dust, cobwebs adorning his crooked pith helmet, he utters a resounding, ‘Aha!’ triumphantly arriving at the idea of calling the new album School Of Whimsy featuring the Prof. as the head of a new educational establishment? And that’s how things start off at least, though after the opening Words From The Headmaster in which we’re warned, “It’s a little bit different to what’s gone before/ but familiar enough so you’re reassured”, it’s pretty clear that the ‘whimsy’ rather than the ‘school’ is wearing the trousers on this LP. And frankly that’s how we like it.

Whimsy eh? Yes, try this for size: the fine pop sensibilities of neo-Victorian-meets-Joni Mitchell-hop ‘look on the bright side’ anthem Downside Up? Not out there enough? What about One Too Many then? It’s a tribute to Elemental’s trusty sidekick and beat provider Tom Caruana, employing a reggae-saturated groove which imagines said Mr Caruana living two weeks’ journey into an enchanted forest. Still want more? The idea that the Professor might have created a doppelganger or a hundred of himself because he’s too busy to do everything – oh and that each of them has made a hundred professors and each of them wants to make even more doppelgangers. DOOM eat your heart out. Still not enough whimsy? Right you’ve asked for it then – album highlight SQRL. On this Elemental is stalked by squirrel minions set upon him by a sinister swan. Never more commanding than when he is telling a story, our man describes how “There’s one in my bookshelf, one in my luggage/ One in my underpant draw, four in my cupboard/ A third filling a swag bag with my family jewels/ You squirelly bastard, that’s not cool.” Never mind the counting – that’s lyrical science right there.

But hold on a minute isn’t this whole chap-hop thing disrespectful to the cultures that birthed hip-hop? Oohh, that’s torn it – if that’s your mind, the Prof.’s got words for you – get off his case, “chap-hop is a parody of class not race.” He’s right, of course. You can’t pull off something this accomplished without a genuine love of, and facility at, the medium you’re using anyway. And if you want evidence of that, it’s there in Elemental’s seamless integration of hip-hop’s lyrical tropes with the nonsense rhyming tradition of the likes of Edward Lear as well as Caruana’s well-established production pedigree which continues to draw from an apparently bottomless supply of original instrumentation and sample-based boom-bap beats.

Now then, all that nonsense aside, when the School Of Whimsy dust has settled, the marquee has been taken down and the giant tea urn wheeled off to god knows where, work will have to begin on a successor. Could there be any clues as to its direction? “Why it’s Gideon!” “Oh yes. I escaped the ‘Apeqwest’ album!” Turns out Gideon has hooked up with Professor Zero and the evil squirrel-commanding swan in a ‘dastardly trio.’ Well, I say ‘trio’ – apparently there is a mysterious ‘other’ in the offing – the ‘greatest foe’ the Prof. will ever face. Fade to static…
(Out now on Tea Sea Records)