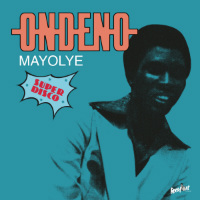 Look sharp – Rocafort Records are at it again with a 12″ repress of the original version of Jean Ondeno’s big-ass late seventies afro-disco number Mayolye. That’s nearly four minutes of pumping wah-wah drenched four-to-the-floor with layer upon layer of extra afro-percussive elements to you. And since it’s afro-funk related and a remix is required, there’s only one person in town to ask. That’s right – Mr Mukatsuku himself – Nik Weston. You know the sort of deal, “Oi! I do afro stuff round here. You wanna do an afro-edit, you ask me first.” “Yes, Mr Weston. Sorry Mr Weston!” But hang on a minute, this is afro-disco isn’t it? And we all know it’s that when there’s a disco edit required, it’s practically the law that a certain Mr Kent gets first refusal. Man this could get messy!
(Out 19 February on Rocafort Records)