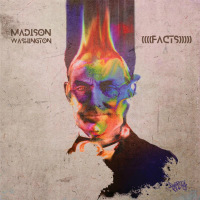 If you caught the phenomenon that was the Pan Amsterdam LP The Pocket Watch earlier this year, you’ll have heard of the Def Pressé label. However, the other jewel in said label’s crown – the two of them linked by dint of having the same producer – is Madison Washington. Where Pan Am is the inspired teaming of Leron Thomas and thatmanmunkz, Madison Washington is the inspired teaming of Sheffield producer ‘munkz with San Francisco’s Malik Ameer on the mic. Now, following the single release of the title track, along with Baytrified and No Cliche, the full double LP is finally here. And it doesn’t pull any punches. Not that you’d expect an outfit named after a man who escaped slavery twice (the second time after going back for his wife) to pull any punches.

Ameer explains that the album’s central conceit is to re-imagine the experiences of Madison Washington as rapped soliloquies through a contemporary lens. With an official drop date that coincided with last month’s black history month, this release, as you can imagine, is not thematically impressed with the current state of race relations in the U.S. The relentless worrying news headlines from the States are reflected in the opening skit, Bioluminescence, on which Bruce Edward Sherfield delivers the lines, “I just woke up one day and said, ‘I’m forty and I’m scared'”. Well, who wouldn’t be, in a country where the propagator-in-chief of ‘fake’ news evinces the typical psychopathic trait of blaming the victim for his own glaring faults? It is fitting indeed then the first cut proper is title track Facts. It’s an urgent guitar-n-sirens-laced beast that takes a hefty swipe at the man and implicitly one in particular known for his evidence-free opinions. Elsewhere, the queasy, off-kilter Baytrified considers the insidious menace of ‘gentrification’ and the summery funk of California Hypnogogique belies a message about ‘contemporary slaves.’ Talking of summery funk, the album closes with the P-Funky (although in the best Clinton-esque tradition, ironically titled) Just A Party. The approach is not the in-your-face sloganeering of Public Enemy or Dead Prez then, though the dismay and the fire are there nevertheless. You might argue that (with the exception of the title track) munkz’ beats which superbly blend 70s soul, 60s free jazz and old school hip-hop with electronica have a disarming effect on the message. But the ‘softly, softly’ approach often works where a bull in a china shop fails and what you hear on this is likely to inveigle its way into your consciousness and stay there.
(Out now on Def Presse)

Posted on 4th November 2018 no comments