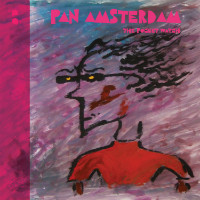 And now, after two singles (Plus One and The Lotion Song) destined for classic status once the word on Pan Amsterdam reaches critical mass, comes the debut album Pocket Watch – also destined for classic status. Why? Simple – the combo of lushly mellow, jazz-laced hip-hop beats from producer thatmanmunkz and Leron Thomas’ lazy drawl as he delivers bars of effortless wry humour and endlessly referential wordplay is as distinctive as it is brilliant.

You can sense The Pocket Watch is going to be a winner from the opener and title track which is essentially an extended skit in which an amusedly wary Thomas pretends to converse with ‘Chris’ – a.k.a Christopher Walken or rather Walken’s legendary dialogue from the Pulp Fiction flashback scene in which he presents a young Butch with the watch that daddy (a POW in North Vietnam) hid, ‘up his ass.’ From here, things segue straight into Pan Amsterdam’s introductory track proper – debut single Plus One – on which Thomas’ avuncular half stream-of-consciousness/ half tongue-in-cheek delivery comes across like a lounge rap DOOM. Bars peppered with allusive rhymes like “thatmanmunkz on the beat/ We go slumming in villages throwing daggers at feet” on which a hat is casually tipped to Detroit hip-hop’s finest, are typical. Hunan Garden Takeout swaps a jazz vibe for a lo-fi, synth-powered vibe and is probably the most lyrically referential cut on the album forging sentences out of movie and song titles while namedropping everything from Bruce Lee to the Beatles or as Thomas puts it, “So go and kill bill/ It’s the only way they would know Pai Mei/ Shaw Brothers be ill.” On Randy Smiff Diner, ‘munkz is back to offering Thomas jazzy boom-bap and our man Leron is sending up everything from presidential denials of infidelity to health fads like drinking your own piss. Know The Difference underpins Thomas’ musings with a dirty great slab of electro funk and then it’s time for another lengthy skit, Good Ol Days, in which Thomas skewers beauty treatment try-hards and musical pseuds – among them, be-bop players, “and I’m like dude – c’mon – if you was livin back in the days on 52nd Street in the golden age of be-bop…you’d be playing Tiger Rag.” The latter part of the album includes genius second single The Lotion Song (on which the target is social media), skit Darlene (just over a minute of funky bass n beat-driven Thomas musings) and Greek Codfish – an electro-tinged, broken beat-powered Thomas-stream-of-consciousness bringing a short, sweet and highly convincing debut to a close.

By way of a postscript, it’s worth noting that things get a bit more heavyweight on the album’s seventh track Landlord Elijah which is part social commentary and also apparently autobiographical look at Thomas trying to get his start in the biz. Not as an emcee some may be surprised to hear, (Thomas is a very accomplished jazz trumpeter) though the track does partially reveal the genesis of Pan Amsterdam at one point with Thomas rhyming, “If it was already written, then shall I not have scorn?/ A jazz musician died, Pan Am was born.” If there’s truth to this claim, then it’s jazz’s loss and hip-hop’s gain.
(Out now on Def Presse)