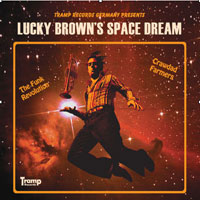 I had a space dream once. It was after I ate some cheese that had been in the fridge a while, by mistake. I don’t know if Joel Ricci a.k.a. Lucky Brown has availed himself of the mind-expanding properties of what might best be described as very mature cheddar but his particular space dream seems to have taken him on a funky trip back to the dawn of funk. And when I say ‘dawn of funk, I mean a time when someone else with the surname Brown was experimenting with adding a heavily syncopated beat to mid-sixties soul. For, despite the Space Dream title, Lucky’s is far from the acid-fried prog-funk of Funakadelic and The Undisputed Truth that you might expect. In fact it’s a very earthy kind of funk with a whiff of the swamp about it. Were someone to tell you that this was recorded in a shack somewhere out on a bayou that was cheap to hire because the place was right in the middle of ‘gator country – you’d be inclined to believe it. Funny that, because some of it at least was recorded at a log-cabin by a lake. Definitely one for fans of that Bullfrog side project Kid Koala did about ten years ago or even very early G Love & Special Sauce as well as good ol’ southern fried funk.
(Out 18 April 2011 on Tramp Records)
Listen to Lucky Brown – Lucky Brown’s Space Dream HERE
(PRESS RELEASE) After a whirlwind tour that the police couldn’t even stop, I assembled the Funk Revolution in my one-room cabin, called Chez Jojo. I gathered together all my salvaged, scavenged, and repurposed gear and completely improvised recording techniques and introduced them to a band that was hot and true, playing up to the presumptuous name I had just given them. After our debut single, ‘Don’t Go Away,’ the rest of the material from this session would be taken down to Sleng Teng Studio and messed around with for years until being realized as more singles for Tramp. Isaac Weiser played Bass on this session and Delvon LaMarr was playing a Hammond that took up most of the room. No one even complained.

The Lake-Side phase of this Space Dream happened when we recorded in drummer Olli Klomp’s living room in his log-cabin on an island in a lake. I remember that it was the hottest day of the summer. We would swim in the Lake in between takes to cool off (being careful not to disturb our Crawdads that were contentedly grazing on barbecued chicken bones just beneath the dock). I blurted out “Lake-side…Crawdad Farmers!” as the tape began to roll on ‘Jesse’s Party’ and it ended up being the winning take so we just went with it. We had the transcendent Jonathan Sherman on Bass for this session.