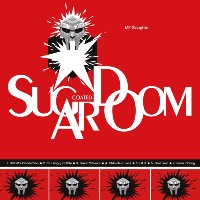 It’s a given that timing is everything in music – most obviously in terms of composition and production but often just as much in regard to conception and release – the latter two doubly poignantly so in the case of this massive DOOM vs The Sugarcubes mash-up LP from turntablist and producer Krash Slaughta. Which is why the tale of this project’s gestation is perhaps what should be told about it before anything else.

Begun last August and finished on 25 October, the album started life as an idea born from a casual listen to final Sugarcubes album Stick Around For Joy that Krash had bought a copy of years before in a charity shop. Contemplating the cover art while listening to the LP and the track Hit in particular, it came to him that here might be the musical basis for a concept LP in the grand tradition of the hip-hop mash-up album. Thus the project was born, becoming something of an obsession as lockdown restrictions recommenced through a sanity-testing autumn. As it developed, the provisional title of Stick Around For DOOM morphed into Sugar Coated DOOM and Brighton artists Leigh Pearce and Rob Crespo were roped in to create the artwork. So pleased was Krash with the results that he decided to self-finance the pressing of the LP to vinyl which in turn would allow him to send a copy to DOOM in the most fitting format. On that basis, along with his dad’s advice that if you want something done properly; do it yourself’, he initiated the process for a limited press run as soon as the project wrapped and telephoned his dad (who’d been shielding and who he hadn’t seen for months) to say he’d done precisely that. In a tragic twist, this turned out to be their last ever conversation, for Krash’s dad died suddenly the next day. Two months later of course, while waiting for the Covid-slowed vinyl pressing process to complete, came a further tragic twist as the world received the delayed news that DOOM himself had also passed away back in October – in the event, only five days after Krash’s father. So it’s no understatement to say that Sugar Coated DOOM carries significant emotional resonance for its maker, forever linked as it will be to the deaths of two of his personal heroes. The vinyl run is strictly limited to 250 vinyl LP copies and no release is planned on digital, CD or cassette format, or any repress and there will be no 7″ format release of any tracks.

Which brings us to the content. The album contains seven vocal tracks, with an alternate version of one and instrumental versions of five of the seven across two sides of an album with the music, track names, LP title and cover art mashing up musical, lyrical/ textual and visual elements of The Sugar Cubes’ Stick Around For Joy with DOOM acapellas, track names and references. Listeners won’t need long to appreciate that Krash Slaughta was right to be proud of his creation, almost certainly correct in thinking DOOM would dig it and no doubt The Sugarcubes too. Also, who would have thought The Sugarcubes had so much potential for beat-mining? But then seeing potential in the unexpected was always a vital skill from the golden era of sampling in hip-hop and those who follow in the tradition. The first track proper, for example, swipes Madlib’s lo-fi beat from underneath the vocals for Figaro and replaces it with the looped and beefed-up opening bars of the Cubes’ I’m Hungry. The result is a natural fit. But then the blending of elements in every track on this release provides evidence of the effort and love put into its creation, reinvigorating DOOM’s classic vocals while re-purposing The Sugarcubes in a manner that will delight. Indeed, if you’d didn’t know the work of Bjork’s former band, you’d be unlikely to pin an early 90s alt-rock LP as the sample source. I imagine listeners will have a hard time picking a favourite too. Perhaps Hit It (based on the track which triggered the project idea in the first) which splices the Bond-theme-ish Hit with My Favourite Ladies might prove the most popular, or the monkey’s favourite, Nurse Chong, which blends Happy Nurse with Raedawn (named for Tommy Chong’s daughter) from Viktor Vaughn LP Vaudeville Villain. Whichever one punters pick though, anyone who hears anything off this will know it’s one to rank alongside your other favourite hip-hop mash-up albums. And who knows – perhaps even Mr Daniel Dumile himself might have considered it a not unfitting epitaph. Audio snippets below.
(Pre-order from 9pm 22 January HERE/ Shipping March)