JSTAR feat BLACKOUT J.A: All I Have (JOE REVELL remix) 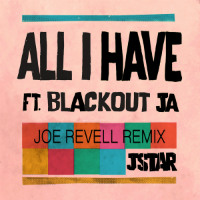 Looks like JStar’s maintaining a higher profile this year since here is his second single already though culled, somewhat unusually, from nearly three year old album Stand To Order. Then again – it is a remix, and one by Kiwi Joe Revell no less – a man who clearly revels (thank you I’m here all week!) in the fact that all he has (and another one!) is a great big rolling drum break. He uses it judiciously though, deftly converting the original’s uptempo skank featuring dancehall’s gravel-iest toaster, Blackout J.A, into a rolling slab of reggae hip-hop featuring dancehall’s gravel-iest toaster, Blackout J.A. Bob’s your uncle – floor filled once again! This being a digi-single release though, the fun doesn’t stop there and purchasers of the full package get the original and an instro dub of the same too.
(Out now HERE)