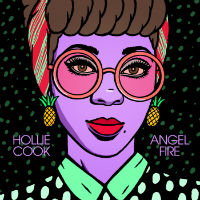 Ah – Hollie Cook – always a pleasure – especially since she has a new single out entitled Angel Fire. All the elements of a classic Cook reggae cut are there, the butter-wouldn’t melt vocals and a classy reggae beat with pop savvy. It’s what she once referred to, tongue-in-cheek, as ‘tropical pop’ in fact. A term which has no doubt haunted her ever since, like the ghost of Amazulu, bandied around with – er – abandon by music journos and which this post has done precisely nothing to quell. What else do you need to know? Oh yes – Angel Fire is the first single off her soon-come new album (her third) and is produced by Youth of Killing Joke. Heavyweight!