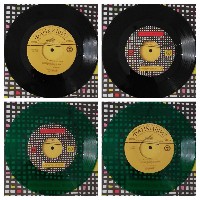 It’s DJ Paul Sitter again with another quality 45 – this time the Impressions Like That EP. Not totally sure why it’s an ‘extended player’ given that it’s a 45 with – er- one track on each side and neither over four minutes – not that you’ll be complaining when you hear them. Take A-side It’s On Like That for example – an uptempo hip-hop bump based around an old Soviet-era psychedelic library music-type sample and featuring Brit-hop luminary Dr Syntax on the mic. Arguably the B-side, an instrumental, is even better, continuing the psych/library feel by reworking a bit of Janko Nilovic, plastering super funky drums from Madd Chieff on top of that and ending up with a cut-n-paste hip-hop take on a spaghetti western soundtrack. Lovely jubbly!
(Out now HERE)

Posted on 29th September 2022 no comments