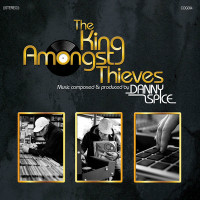 You might have heard that vinyl’s dead and nobody samples off old records any more but evidence continues to flood in to the contrary. Here’s UK producer Danny Spice with the latest proof that the heavyweight funk can never be faded – as Funkdoobiest once put it. Ten-tracker The King Amongst Thieves EP is the full release off which Spice’s juggernaut-weight Craig G-featuring King Of The Beat boom-bap single from last autumn was taken.

Craig G? Wasn’t he a member of Marley Marl’s legendary The Juice Crew along with (among others) Big Daddy Kane, Masta Ace and Kool G Rap. Yep, the very same. That’s some pretty big credentials right there. Oh – did I mention the presence of former Scratch Pervert, Mr Thing on this too? Or that rappers Kool Sphere of Verbal Threat, Oxygen and Simple One appear? Or the fact that Spice produced the whole thing old school style with his trusty sampler and a shed-load of dusty vinyl? What’s going on here? I’ll tell you what – phat shit for the wheels of steel. If you like it Freestyle Professors and the production of 12Fingerdan, this is for you. Full tracklist below player.
(Out 5 October on Carry On Going)
iTunes link HERE

Posted on 25th September 2012 no comments