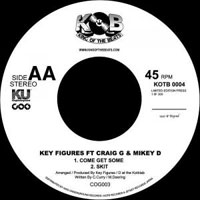 Danny Spice drops a new beat of ominous but vintage-sounding head-nod and who should happen along with a few rhymes but former Juice Crew member and rap icon Craig G. There used to be loads of this stuff around in the mid-nineties and…well, it still sounds pretty good. It’s the sound of walking into a really dark and packed–out basement club, redolent of pungent weed in 1995 and feeling a vague sense of menace. Good times. Spice joins the growing line (or should that be rack) of producers on this side of the pond hooking up with U.S. emcee legends to re-create some of that boom-bap, original rap. See also the Funk League, Mr Fantastic and DJ Format – all of whom have big things in the pipeline along with Spice himself whose debut LP King Among Thieves is also on the way. Check the flip for more Craig G action this time accompanied by Mikey D of Main Source on what appears to be a slept-on 90s beat from Key Figures.
(Out 26 September on Carry On Going Records)

Quote “Queens Bridge to UK/dudes say they make beats/but compared to us/you just coming wit dat fake heat”. Craig’s lines pay respect to both the producer as well as the age old art of crate digging. Having worked with the likes of Marley Marl, Large Professor, Pete Rock & DJ Premier to name but a few it’s no wonder the NY battle rapper is still going strong after 25 years in the business. No added preservatives here just pure uncut Hip Hop in its purist form some break beats, turn tables a sampler and an ill MC job done.

The limited edition individually hand numbered 300 pressing of the 7inch vinyl release has almost sold out in a matter of days, which gives you some indication of how big this track actually is! This is real Hip-Hop that bangs from start to finish produced by a talented beat-maker!

Make sure you are on the lookout for the full length album “King Amongst Thieves” from Danny Spice being released on Carry On Going Records real soon.

Posted on 25th September 2011 no comments