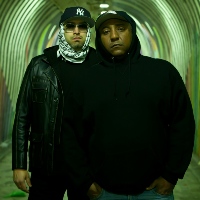 For fans of hip-hop with grit, it’s time to cop a second full-length barrage from Bronx Slang, the sleeper hit signings to Nick Faber’s Fabyl Recordings label with the release of LP number two, titled Substance. Consisting of veteran Bronx emcees Jerry Beeks (followed by the monkey since his excellent 2001 LP Crop Report produced by Touché of Wiseguys fame) and Ollie Miggs – sometime of Shootyz Groove – the pair have acquired a reputation for dropping the sort of hard-hitting mic salvos last seen in Public Enemy’s heyday as they take America, the internet and the world to task. And lord knows it’s a bracing to hear somebody give bigotry, corruption and incompetence ‘what-for’ in a time when avatars of those three qualities seem to have had a free pass for way too long. As before, the duo’s rhymes are underpinned by beats from Jadell and Fake Blood (a.k.a The Wiseguys’ DJ Touché) two producers who know a thing or two about heavyweight breaks and samples. Both have worked with Beeks and Miggs previously – on and before album one – the difference this time being an increased contribution from Fake Blood such that each producer turns in around half the beats each.

At fourteen cuts, Substance weighs in at one track longer than its predecessor and opens with the urgent boom-bap of Living With A Mask On where our heroes “systematically..sabotage sound systems savagely”, skewering frontin’ and its consequences at all levels from fake emcees, through Trump to Wall Street.  Up next is Mic Check on which the opener’s breezy strings loop is switched for tense John Carpenter-esque synths as Beeks and Miggs engage in intricate wordplay observing that, “Shorty sparkle like she Meghan Markle/ Spoil her with all my royalty and she’ll get murdered by my queen tomorrow…seen Diddy change his name when his pockets got puffy/ Seen Michael Jackson get murdered by Conrad Murray…The undisputed, un-reputed like when Trump colluded/ I seen you rushin’ like you running late to make manoeuvres.” After this, racism and racial stereotypes come under heavy bombardment on You Already Know‘s guitar-n-horns-led onslaught with the pair pushing back hard against the kind of alt-right (a.k.a traditional far-right) attitudes bolstered by Trump, followed by the doom-laden Another Night In New York which delivers a sound and word-scape evoking a The Warriors-era Big Apple wasteland – even if the decay concerned is now more in minds and systems than infrastructure. Album one’s Excuse Me Officer‘s roll call of non-white names shot by the police is reprised in Excuse Me Again with yet another depressing list of lives taken – so don’t be surprised to hear part three on the next LP for, as Beeks puts it, “So by now if you don’t think that there’s a cause for alarm/ Well at least understand why Kaepernick took a knee.” Elsewhere, single Happens A Lot takes a look at the ups and downs of a hip-hop career, Your Mind’s Incarcerated recalls William Blake’s two hundred plus-year old sentiment of the people’s misery arising from ‘mind-forg’d manacles’ and closer Jane delivers a cautionary tale about self-hate, drug addiction and the underbelly of the American Dream. Perhaps the track that best captures the album’s approach is another former single, Copy That, which sees Bronx Slang lyrically dig in for the long haul against populist snake oil. I say ‘dig in’ – it’s effectively another devastating verbal riposte to the man but then they do say the best form of defence is attack.  And is the world is a better place with Bronx Slang on the counter-attack? Copy that!
(Out now on Fabyl Recordings

One Response to BRONX SLANG: Substance