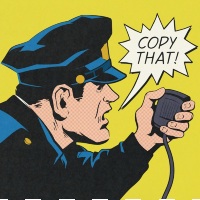 New lyrics of fury from Bronx Slang as they take up their debut LP’s anti-establishment baton to battle American corruption and racism for new single, Copy That, the first off their forthcoming LP. What’s that boys? You’re under attack? Ah well, you know the drill, first they mock you, and if they doesn’t work they try to buy you and if that doesn’t work, they try to kill you – it’s all a trap. Top marks to our heroes Jerry Beeks and Ollie Miggs then for doubling down rather than backing down and going even harder over a portentous beat courtesy of Fake Blood. 2020 zeitgeist captured and torn a new one.
(Out now on Fabyl Recordings)

One Response to BRONX SLANG: Copy That