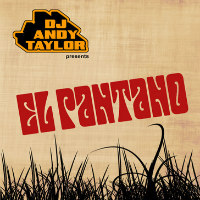 I’ve been waiting ages for an Andy Taylor LP – ever since the canny Scotsman sent me his excellent (and still unreleased) Louisa Rox collaboration Pray in an unsolicited email five years ago in fact. Actually (given how long ago it was), I think he might even have contacted me in a Myspace message. A what? Never mind – it’s finally here. I suspected title El Pantano might be Spanish for ‘soon come’ or something but it turns out that it’s actually Spanish for ‘the swamp’ – cheers googletranslate. Apparently the world’s largest swamp is the South America’s Amazon river floodplain. Coincidentally, South America is a huge influence on more than a few beats on this LP – which I believe is the third on Smoove’s Wass imprint and another worthy addition to its discography.

Like Daytoner’s Sunburst Radio and Renegades Of Jazz’s Hip To The Jive before it, El Pantano comes laced with samples and Taylor also contributes his own playing of double bass, electric bass, guitar and keyboards too. These aspects give a combined sense of both hip-hop production and a live band feel. As mentioned above – latin (or rather afro-latin) influences loom large on the album – on tracks like Soul Rep and Jah Mambo but hip-hop also gets a look in too on second track Mayfair Slums where Scots MC Papa Ganoush rips into posing bling rappers. Then you get massive party joints like Samba Stylin and Hardcore Howlin which combine both. One of the biggest highlights though, has to be this LP’s collab with vocalist Louisa Rox – the righteous and timely reggae-tinged fight-the-power anthem Stand Up. Indeed. Don’t mind if I do. Look out for wax singles from the LP as well as remixes soon!
(Out now on Wass Records)

Posted on 2nd September 2013 no comments