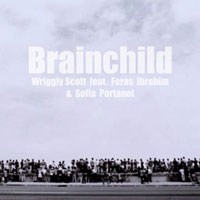 Missing that nineties/turn-of-the-millenium boom-bap with jazz-sampling beats? Then pine no more, for Wriggly Scott and homies Sofia Portanet and rapper Feras Ibrahim answer your prayers with Brainchild. Scott delivers the sort of beats once heard on Asheru & Blue Black’s classic Soon Come LP, Ibrahim’s mellow staccato flows are on a conscious tip and Portanet rounds it all off nicely with smokey jazz club vocal vibe. In a word, class. It’s also free. Yep – Scott, rather generously, is dropping one free track a month in the run-up to the release of his next EP and as with its predecessor Twilight Empires – it’d be rude not to…

(PRESS RELEASE)
Brand new Latin-infused track by Wriggly Scott featuring MC Feras Ibrahim and vocalist Sofia Portanet. Leading up to the early 2012 release of his next E.P. British-born, U.A.E-based producer Wriggly Scott will be releasing one free track every month. In a follow-up to the first track ‘Twilight Empires’ which featured MC Jibberish reflecting upon the recent Arab uprising, Scott returns with a melodic up-tempo track laden with a Latin guitar lick and infectious bass-line. Featuring the vocals of Sharjah-based MC Feras Ibrahim and Berlin-based Sofia Portanet.