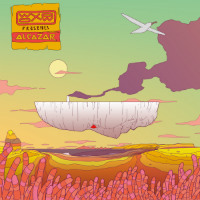 Back in May, MB featured single, Up, by Italian producer Woxow and featuring Danish MC Blacc El, which despite its firmly European origins managed to channel a decidedly golden-era hip-hop vibe. Now comes the release of Woxow’s debut album Alcazar which, besides Up, boasts appearances from Ken Boothe, J5’s Akil, Blurum 13 (all on the same track!), Pugz Atomz, Hannah Williams, Cyril Benhamou and Lostpoet.

While brief (it weighs in at a super-light seven tracks), Alcazar holds its own in terms of the crafting and listening experience. The intro finds Pugz Atomz explore the ongoing plight of the black man but nevertheless deliver an inspiring message over a chaingang blues-inspired beat and then the baton – and lyrical theme – is passed to new single Chaos (out now on seven inch vinyl ) a moody slice of boom-bap with Akil and Blurum 13 trading bars and Ken Boothe delivering the hook. The hip-hop continues one track more with Up and then it’s all change for an instrumental beat psych-out with influences that sound pitched somewhere between the cajun and north African until the mini-Moog antics kick in. Interludio unsurprisingly provides an interlude though the musical vibe switches up again – this time to jazz and then to the synth-led psych-soul of Watering Seeds on which Hannah Williams and Lostpoet continue the album’s lyrical preoccupation with loosely exploring the profoundly wrong turns the human race appears to be taking lately and considers the prospect of karmic retribution of sorts. Closer, Look Around, slows the tempo for some soothing, dusty piano-led breaks while rapper Stimulus appropriately provides the album’s most uplifting lyrics – because nobody likes an unhappy ending, right? But as the lyrics on this frequently imply, if humanity wants a happy ending, it needs to sort its shit out. Regarding this, Woxow and crew lead by example in presenting a finely-tuned operation.
(Alcazar out now HERE/ Chaos 45 out now on Little Beat More Records)