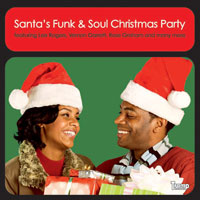 Christmas songs really are the nadir of music aren’t they? Slade, Wizzard, Jonah Louie, Boney M, Wham, Bing Crosby, The Beach Boys, Shakin Stevens, Pariah Carey, Cliff fucking Richard…I don’t what’s worse – the same twelve songs played from at least December 1st every year, in every overheated, queue-ridden shop you go in or retail managers’ insulting notion that you’re such a dull-minded cunt that hearing them for the millionth time will engender a seasonal loosening of the purse strings rather than make you want to stamp on their cd player and stab them in the face with the shards of their Now That’s What I Call Christmas cd. If only they’d got their hands on this, the new funk and soul compilation from diggers extraordinaire, Tramp Records!

Somehow on Santa’s Funk & Soul Christmas Party, Tramp label boss Tobias Kirmayer and his buddy Jan have managed to dig up not one or two but thirteen (!) funk and soul Christmas obscurities that actually sound good. So good, in fact, that you wish quite a few of them weren’t Christmas songs so that you could play them at other times of the year: Jimmy Reed’s Christmas Present Blues (no, really) for example, or wah wah kings The Counts with their Vernon Garrett/ Sir Stan collabo Merry Christmas Baby. Perhaps my favourite is Rose Graham’s funk/soul sister cut Black Christmas which has something of Jeannie Dee’s Two Heads Are Better Than One about it but with a more shimmying dancefloor groove. The collection is also stylistically wide-ranging. We run from crusty recordings from the dawn of funk and before through to Jimmy Jules & Nuclear Soul System’s seventies soul of Xmas Done Got Funky and beyond too, since this collection also contains 2007 retro-soul release Stone Soul Christmas from Daptone luminary Binky Griptite.

Santa’s Funk & Soul Christmas Party is hands down the best collection of Christmas songs this side of Satan’s Funk & Soul Christmas Party and maybe even better than that. More – it’s the only seasonal album I’ve ever been able to listen to all the way through without wanting to hang myself with a stocking. Not that I’m a Tory MP or anything. Frankly, nobody’s as surprised as me that this is getting a five star monkeyboxing rating – it’s a ludicrous situation that’s best summed up in the lyrics to Gary Walker’s JB cover Santa’s Got A Brand New Bag (I promise I‘m not making these up!) “He’s oh so fat, but his beard is pretty clean/ He ain’t no drag…/ Santa’s got a brand new bag…”
(Out 28 November on Tramp Records)

(PRESS RELEASE)
Christmas compilations are often cheesy, smooth selections of bland, overplayed seasonal pabulum. Even announced with “funky” or “groovy”, it often leaves listeners disappointed. So were Jan and Tobias. First, they were bugged out by the all filler-no-killer compilations. The second and more important reason was that of the considerable number of proper Rare Groove tunes recorded and released in the 1960s and `70s, many languished in obscurity. The pair started a collaboration to create a funky-soul Xmas Compilation.

The project started in 2010 when Jan illustrated the diversity of more than 50 Christmas tunes in the field of Jazz, Funk and Soul to Tobias Kirmayer of Tramp Records, Germany. Although some of the titles had already been compiled, there were exceptional songs that grabbed their attention. Major record companies owned a handful of the initially pre-selected songs. The Majors refused or ignored Jan and Tobias’s repeated requests for licensing. Where other labels would have given up in despair, Jan and Tobias were determined to move forward with the project independently.

Again, this story underlines the philosophy of Tramp Records: Tobias always tries to present an exciting track listing of so far unheard songs. This Xmas Compilation stands in line with that. All songs are from mostly little-to-unknown artists who have yet to make it to a world-wide audience. Despite the fact that these terrific songs never topped the charts the quality of this compilation easily shakes hands with famous Christmas records of major artists like James Brown or Lou Rawls. Ladies and gentlemen, sing along, shake your hips and dance because: Santa’s Funk & Soul Christmas Party is goin’ on.

The CD booklet and LP sleeve contain scans of all 45RPM single labels as well as liner notes to each song. The vinyl comes with a gatefold cover and is limited to 500 copies.