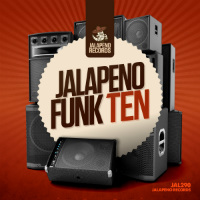 Winter: freezing-ass weather, getting up before the sun does and – well – that’s pretty much it isn’t it? Still there is the occasional light in the darkness – one of those being the annual J-Funk compilation. No, not another collection of obscure Japanese 80s boogie – I’m talking about Jalapeno Records’ annual raid on their own discography, now in its tenth year, with Jalapeno Ten a.k.a Jalapeno Vol. 10. Now if I was in charge of such a project, I reckon I would mix up a choice selection of stuff that was hot in 2018 with a few choice exclusives. I reckon I’d make sure that digital versions of vinyl 45s I’d just released (almost by way of promo-ing this comp. before its release) would be on it too. Funny the way great minds think alike isn’t it?

Exclusive-wise this opens with Smoove whetting your appetite with his remix of The Allergies’ Andy Cooper collab. Run It Back. You get fluffed still further by Izo FitzRoy’s Shawn Lee-produced Glory Days, Flevans and Elliott Cole’s Two Steps, and Soopasoul’s Soul Battle and then Basement Freaks brings you to a froth with his Kamy and Daiva-featuring disco-fied rap nugget Bring It Back. Incidentally, audio of this last nugget is premiered below for your aural pleasure. Basement Freaks’ recent 7″ remix of his own Kylie Auldist vehicle White Hot also gets a look-in as does Soopasoul’s 45 cut If It Ain’t Funky Back It Up and Gizelle Smith B-side Romeo from back in March. Oh, and we can’t forget The Allergies former dope 45 cut Can’t Keep Working This Hard either – the boys’ second appearance on this and even that isn’t their last. Why? Because you also get the big northern beats of their Big Bad Woman – the flip to When The Heat Comes Down 45. Add in such highlights as Dr Rubberfunk’s Clapton-meets-Booker T Pressure Cooker and the smooth disco of Smoove & Turrell LP cut Love That Kinda Lie from among the balance of cuts and you’ve got something to keep your toes warm until the spring haven’t you?
(Out 14 December on Jalapeno Records)

Posted on 11th December 2018 no comments