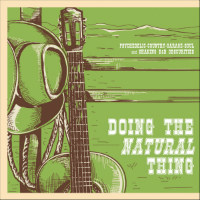 Time to say ‘howdy’ to Doing The Natural Thing Vol. 1 and 2, two big new comps. from the Perfect Toy label as they follow up Funky Country Volume 1 and 2 from around this time last year.  ‘Follow-up’?  Surely the monkey meant, ‘kick-off a new series’?  But is it?  These two new volumes are subtitled Psychedelic-Country-Garage-Soul, while the Funky Country pair were additionally entitled Country Funk, Garage Soul & Some Swinging R&B Oddities. The cover art is by the same artist, the title font is identical (hell – they’ve even used the same stetson and geetar motif!) and shoot if the fat drum breaks, twanging guitars and blue-eyed soul n heartbreak vocals wouldn’t easily qualify them to be a volume 3 and 4 of the earlier series too! Has the Perfect Toy ranch had a ‘visit’ from ‘country funk’ genre creators Light In The Attic Records – or did the PT crew just decide that actually, there was too much garage rock in the mix?  Perhaps we’ll never know, the key thing here is, you’ve now got two more volumes of splendidly obscure nuggets to check out.

A highlight of Vol. 1 is the opener from L.A. Jones which not only gives the series its name but provides silly-hour party thrills with continuous live crowd sounds and Elvis-style drum n vocal vamps. Even better though are the grooving, guitar-twanging funk of Obrey Wilson’s Headman and garage soul mover They Call It The Soul by Randall Gray. There’s also time for a chugging cover of Mustang Sally by Oakbrook Trees and an energetically shuffling uptempo version of Hold On I’m Comin’ by Benchmark. Vol. 2 opens with a garage soul take on another soul standard – I Feel Good providing a loose n sleazy counterpoint to JB’s original super-tight hit. Funkiest cut has to be a toss-up between the uptempo breakbeat n swirling wah-wah-soaked instro I’m Movin’ On by L.A. Jones and another instrumental, the Soul Trippers’ Girl Of Mine, on which guitar from the wide open range – er – ranges over insistent straight-down-the-line funk drums. Mighty Mike Davis gets the award for the most guitar fuzz with his funked-up Johnny Cash-esque All American Boy, while the middle of the LP hits the country-tinged psychedelic trail before returning to funkier terrain at the end on the Grand Ol’ Opry Funk of Judy Hunt’s The One Thing and Woody Wayne’s earworm of a guitar pickin’ party piece. And if them ain’t a herd of reasons for a body to seek these here two compilations out, I don’t know what is.
(Out now on Perfect Toy Records HERE)