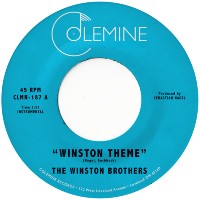 Advertised with an image of a 45 label, it’ll no doubt come as something of a disappointment to punters when they find out that The Winston Brothers’ debut single, Winston Theme, on Colemine Records is only out on digital thus far. Especially when they cop the horns-heavy psych-funk groove of Winston Theme. The good news is that the word on the street, (alright, Colemine label comments on Youtube) hint at an autumn wax release. It’s a tense little nugget on which muted wah-wah squelches away in the background behind the horns over crisp drums and throbbing bass and there’s even a time for clavinet solo in the middle. In even better news, a full LP is set to follow in 2021.
(Out now (digital)/ autumn? (vinyl) on Colemine Records)