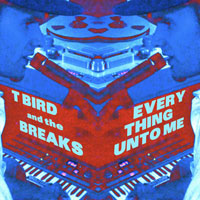 Still criminally unsigned, prolific Texan funk outfit T Bird & The Breaks deliver Everything Unto Me – their first single since the release of second LP Never Get Out Of This Funk Alive and it’s new material that wasn’t even on the album. Everything Unto Me is a heavy, heavy downtempo jam that updates the traditional funk/ soul blueprint via a dash of hip-hop production and sees them further develop their own sound which they are pleased to call ‘chunk.’ With good reason. T Bird’s blues-funk vocals have become so raspy I used them to take the rough edges off some shelves I was making yesterday while the rhythm section is now so punchy that if I aim my speakers right I can close the door in my studio from several feet away. There’s even a vocoder vocal breakdown that sounds like Twiki off Buck Rogers talking through a mouthul of bong smoke. In a good way. Available to download now on a ‘name your price’ basis. Show some love for the chunk…

(PRESS RELEASE)
T Bird and the Breaks are one of those gangs of people who could have easily banded together to steal hubcaps or hustle you out of your last dollar in a game of street craps. Lucky for all involved, they chose to make music. The core of this band of musical miscreants consists of Tim Crane on vocals and piano and an unstoppable rhythm section consisting of longtime partner in crime Sammy Patlove on drums and Cody Furr on bass. Johnny “Too Bad” Allison and Sasha Ortiz, on guitar and vocals, add the icing on the red velvet cake. With a sound that pulls from the origins of hip hop, the alleyways of the Crescent City, the grease and grime of an old-school soul review, and all seven of the deadly sins, the Breaks have developed into a locomotive; slowly pumping across America, leaving crowds drenched with sweat and walking funny the next morning. By playing show after sold-out show, T Bird and the Breaks have amassed a die-hard following of fans from Texas to the Bird’s home state of Massachusetts to San Francisco and back again. Currently, the band is hoarding miles of tape — song after song with a new sound — waiting for the moment when the people are ready to hear the sickness that plagues T Bird and the Breaks: chunk music.

Chunk Music (noun): A form of twenty-first century American music consisting of equal parts funk, hip-hop, and rock and roll characterized by its rough sonic quality and energetic, visceral performance. Commonly served hot with a side of girls and brass.

Posted on 21st November 2011 no comments