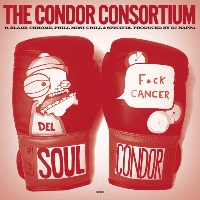 Now then, if you’re faced with mouth cancer advanced enough to be living in a hospice, do you a) roll over and give up or b) throw yourself into an ambitious schedule of dropping quality intercontinental hip-hop releases on vinyl from your hospital bed!!!? If you’re Del Soulcondor, the answer is emphatically the second.  And while this post might have a title focussing on the imminent Soulcondor Slices 3 and 4, largely because, in Del’s own words, “I’m not sure how long I’m going to be around,” such is the groundswell of interest and energy from Del, artists and the record buying public, that our man has assured the monkey an SS005 has also, “taken full shape in just over a few weeks – a deeply personal song by a good friend of mine and an amazing rapper who decided he wanted to write something for me. I have heard it and it touched me so much I had to commit to releasing it on the label. There was even talk of a SS006 yesterday.” And if that’s not an inspirational stance, I don’t know what is.

And so to the records themselves. So far, Del’s Soulcondor Slices have attracted the very best in underground hip-hop and soul on both sides of the pond and the roll-call includes: Mr Thing, Phill Most Chill, Mac Macraw, Soundsci, Blade, Chrome, DJ Moneyshot, Jazz Spastiks, Specifik, Mr Fantastic, Dopamine 189, DJ Nappa, DJ J-Man, HP Lovescratch, Cut Beetlez, Respek BA, Zeeny, Greg Blackman, Genesis and Elijah Bohze – though even then it’s possible I’ve missed someone. And you can rest assured the music does not disappoint. SS001, Save The Wax, saw Moneyshot lay down a heavyweight jazz-inflected beat as a platform for Bohze and Greg Blackman, remixed on the flip by the mighty Jazz Spastiks while SS002 was a chance for Mr Fantastic and Phill Most Chill to flex their chops on uptempo b-boy riot Superfunk with Mac Macraw on a remix tip.

Which brings us to SS003 and 4, available very shortly and respectively (not to mention aptly and poignantly) entitled F*ck Cancer (SS003) and Living For The Day (SS004). On the former, The Condor Consortium (consisting of mic manipulators Phill Most Chill, Blade and Chrome along with DJ Nappa and Specifik) creates another uptempo bump channeling the misery caused to victims and their loved ones by cancer into a fiery ‘fuck you’ to the situation. On the flip, Cut Beetlez slow things right down but if anything go even heavier with a scratch n guitar fuzz-powered beat over which Dopamine 189 can hold forth. Meanwhile SS004 Living For The Day is very personal to Del – not least for the Scots bars of Respek BA over Mr Thing’s cuts and Zeeny’s gorgeously warm and chilled beat. The flip to this is the monkey’s favourite cut of all however – Raise ‘Em High from NY legends Soundsci, featuring a gloriously rolling funky break and old school Big Apple Bars.