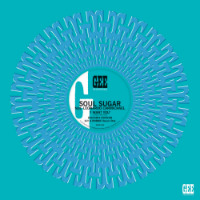 Reggae goes slo-mo disco then on the new 12″ from Gee Street Recordings’ Soul Sugar as the band – known for all manner of retro reggae business – comes up trumps with a highly serviceable cover of Marvin Gaye’s I Want You hit from ’76 in the form of the I Want You Discomix. Standing in for Gaye is eminently capable Jamaican vocalist and previous Soul Sugar collaborator Leonard Carmichael while Soul Sugar replace the cinematic soul of the Funk Brothers’ original Leon Ware and T-Boy Ross-penned beat with a blissed-out 70s reggae-disco vibe. And the good news doesn’t end there either. Why? Because Soul Sugar’s wily fox of a bandleader, Guillaume Metenier has only managed to persuade Sly & Robbie to do a remix! Something of a coup to say the least as the legendary pair lose the extra layers of percussion and thicken up that bass. In fact this is less a record than a musical evocation of the classy late night dancefloor smooch – whichever mix you’re checking. Also comes with the Sly & Robbie instro.
Riddim!
(Out now on 12″ vinyl/ 15 June digital on Gee Recordings)